Our philosophy to arts education is inspired by the story of Walter Suskind. 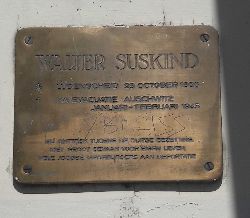 During World War II, Jewish Dutch citizen Walter Suskind and his associates worked with the Dutch resistance movement, risking their lives every day to save more than 1,200 children during the Holocaust. A businessman with a passion for the arts, Suskind emigrated to Amsterdam from Germany to avoid Nazi oppression. When the Netherlands was overtaken, Suskind was selected by the Nazis to run a Jewish death camp deportation center in de Hollandse Schouwburg (Dutch Theater), a converted performance space similar to the Wang Theatre.

Suskind believed in the persistence of the human spirit in the face of adversity. Knowing that he could utilize his position working for the Nazis to save lives, Suskind secretly masterminded the daily escape of young prisoners from the theater. By falsifying lists, removing identity cards from German files and erasing every sign of their existence, Suskind was able to smuggle Jewish children to the Dutch countryside to live with farmers. In 1944, Suskind and his family were arrested and sent to Auschwitz, never to return.

As survivors of the Holocaust, Maurice and Nettie Vanderpol wished to create a unique tribute to those who fought bravely to save hundreds of children during World War II. Inspired by Suskind's courage, ingenuity, and selflessness, the Vanderpols founded the Walter Suskind Memorial Fund at the Wang Center (now Boch Center) in 1989.

In honor of the children saved by Walter Suskind, the Boch Center’s education and community outreach initiatives strive to bring the arts into the hearts and minds of today's young people, offering them unique experiences in the arts. They are given the chance to explore the arts, themselves, and one another.